It is inevitable that over a prolonged and demanding trek like this ailments and accidents will happen. As Jen, our medic says, we are pushing our immune system to the max. The most common illness has been some form of gastric disturbance, which were quickly resolved. A couple of the riders were taken to local clinic; one with a chronic bowel condition flare-up; the other with a painful prostatitis caused by the pressure exerted by hours in the saddle. Hot desert sands penetrated our riding shorts, jerseys, shoes and socks and deep into our skin and lungs with, at times, infectious impact. Several among us were temporarily laid low by heat stroke until we learned to adapt and pay heed to Jen’s admonishments to hydrate, hydrate, hydrate.

We are all covered in scratches and bruises, the normal wear and tear of daily cycling for hours on end in challenging conditions. We have fallen off bikes, been scraped by thorn bushes, ridden through days of painful saddle sores, experienced hand palsy, a numbness from the relentless pressing of the handlebar on nerves in the hand and a host of other minor plagues. Through it all Jen has patched us up, dispensed medicine and advice, patted us on our shoulder and sent us back on the road. As she says, her job is to make sure we can bike into Cape Town.

There have been a couple of more serious incidents. M woke up on the tarmac not knowing what happened to him, except that he couldn’t move his shoulder. He was lucky suffering only a fractured collar bone. It could have been much worse. One side of his helmet was badly dented but there was no head injury. He went back home, was operated on and rejoined the tour six weeks later. Later, he speculated that he’d been speeding down a beautiful tarmac road but had not seen the speed bumps, the rumble strips that are such a feature of our many African roads. He lost control of the bike and consciousness.

W, a large, strapping heavyweight cyclist fell the same day as M. Everyone was sure this would do him in but he was more fortunate. He sustained a badly bruised shoulder and a gash on the knee. His problems came later when he pushed himself too quickly to get back in the saddle; his knee became swollen, the size of a grapefruit. It was infected. He was riding the truck for a week.

After two rest days in Nairobi we had set off early in the morning with the warning to be very careful of the traffic, which was heavy and chaotic. Our route out of the city took us on a main artery, a narrow two-lane road with a constant stream of cars, buses, trucks and motorcycles. Not one driver was willing to cede an inch to another. Cyclists were at best a nuisance, at worst not seen.

Within minutes B fell off his bike and dislocated his elbow. He was sent home but later rejoined us at Victoria Falls. C and his wife, K, had joined the Tour in Nairobi. Maneuvering to avoid a heater-skelter onrush of cars, they also fell off their bikes onto the concrete verge. K was shook up and bruised; C had twisted his back. He was off the bike for a few days, tried to ride again but found it too painful. In the end, he had no choice but to return home. It was the first day of his Tour. There was no possibility of him rejoining.

One rider shooting downhill on a sand-laden dirt road was enveloped in the thick dust of a passing car. Unable to see she struck an obstacle, lost control of the bike which sheered off to the side throwing her to the ground. Rocks opened a cut above her right eye and badly bruised her face. She looked as if she’d been in an all-out bar room brawl. Happily, x-rays confirmed there were no fractures.

I had been lucky or more cautious or both. I had my share of falls, cuts and scrapes. All minor stuff. Now we were approaching one of the most difficult sections of the expedition. We were resting up in Windhoek, the capital of Namibia, preparing ourselves and the bikes for the eight days of rough gravel roads that lay ahead. All we could talk about was tires; what was going to be the best way of handling the terrain. Tallis, the group leader, had advised us, “Get the fattest tires you can”. My regular tires were 38mm; good for the road but perhaps not so much for what lay ahead. I had a spare set of 40mm, which I had used on the dirt and sand roads of Tanzania. At a tire pressure of 45psi, just below the recommended range, they worked well enough given that I had very little experience with sand, dirt or gravel. The local Windhoek bike shop we had been recommended to visit had quickly run out of suitable tires. A friend on the Tour had one spare 45mm tire, which I put on the front, and my 40mm on the back. I kept the psi at 45 thinking that what served me well before should do me again.

Within 20kms of Windhoek we were on the outback roads. If the roads were tough, it was made up by the spectacular landscape as we moved to the Namib desert. The arid, austere countryside stretched to low hills on the horizon. The colors shifted from burnt orange to a dusky red. 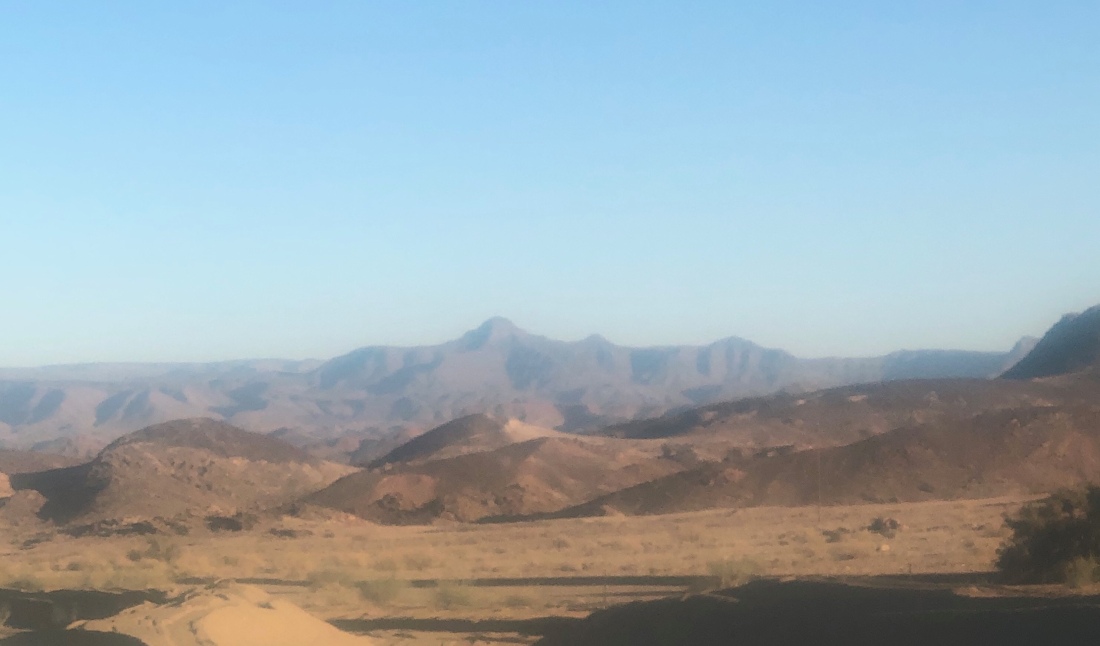 Along the way, we spotted herds of zebras, springboks, and oryxes. An elderly baboon sat on the roadside watching us, bemused by the sight of lycra on wheels.

This was not the road riding I was used to. This, as one of the riders said, was a road baked in hell’s oven: heavy corrugations, sand pits, ridges of loose stone and pebbles and a bright, merciless sun that made it hard to distinguish the road’s contours. On the first day I had two flats in quick succession on my rear wheel. The tire pressure was too low for the rocky conditions we were now riding in. As the bike smashed through stones and rocks, the blows pinched and punctured the tube. After the second flat I hiked up the pressure.

I asked advice of the experienced cyclists how to ride these kinds of roads. They all said the same thing: low gear, high cadence (rpms), power through. I pedaled hard trying to find a line that I could ride but those lines disappeared almost as soon as you found one. I kept switching across the ridges of gravel, scree, corrugation and sand that made up the road. I had one spectacular near miss. R who at the time was nearby over to my left side, said to me, “I was sure your were going down; your bike was leaning over almost to the ground, the wheel twisted the other way.” Somehow I retained my cool and was able to right the bike and carry on.

I remembered another crucial piece of advice: light hands. Don’t force the steering, let the bike find its way. That worked. And I was off buzzing along, slipping and sliding from time to time but able to keep the bike steady. I switched lines with a sure hand, roared down inclines, flew over deep, sandy corrugations. My body shook and teeth rattled as if I had fallen into a concrete mixer. My hands were becoming numb. All the while bicycle made like a machine being roughly dismantled in a junk yard. I rode into camp feeling tough and proud.

The second day it was the same again but I rode with even more confidence. The rewards of that day were tremendous. We climbed the Spreetshoogte Pass and from there looked across the plateau of the Namib desert “silent in wild surmise”. The sight seared the heart as if out there a great force was slowly gathering strength.

I woke on the third day feeling a touch unwell. I wondered if I should head out or start later in the day. I dismissed my body’s message. There had been other times when I hadn’t been quite right but as the day wore on I gained strength and wellness. I shook off the feeling and saddled up. The first hour, mainly climbing, was fine; the lines were readily accessible. Then the road took a turn for the worse. The conditions were different from the previous two days; there was a lot more sand and sand pits, the ridges of loose gravel were longer and deeper, the corrugations continuous. I took no notice and assumed that what had got me through the previous two days would see me through again. Within ten minutes of hitting the rougher road I turned the bike sharply and took a tumble. I sustained a couple of scratches, a grazed hip and a bruised ego. I sat by my fallen bike cursing the road and myself. Fellow riders helped me swab the wounds and I was off again.

I attacked the road as if it were an enemy to be conquered, but it resisted my efforts throwing up a new challenge at every turn. I became angry and resentful. I had set my mind that what lay before me was the same as the previous two days. The appearance was deceiving. This was a different beast altogether but my attitude had congealed. I was no longer in the flow that had seen me through the fierce head winds of the previous week. I wasn’t present in a relationship to what was before me. I did not see the here; anger had closed my eyes and infected my spirit. The result was inevitable; within another twenty minutes I had fallen again. This time I took more of a beating: a gash on the arm and the other hip more badly bruised. My day’s ride was over. Even though many had abandoned the ride that day and the toughest of our riders said he had never been on a road that bad, I knew that it wasn’t the road that had defeated me. It was my mind set against itself. A painful lesson, but in the end salubrious. The promise lies within if only we are prepared to receive it. 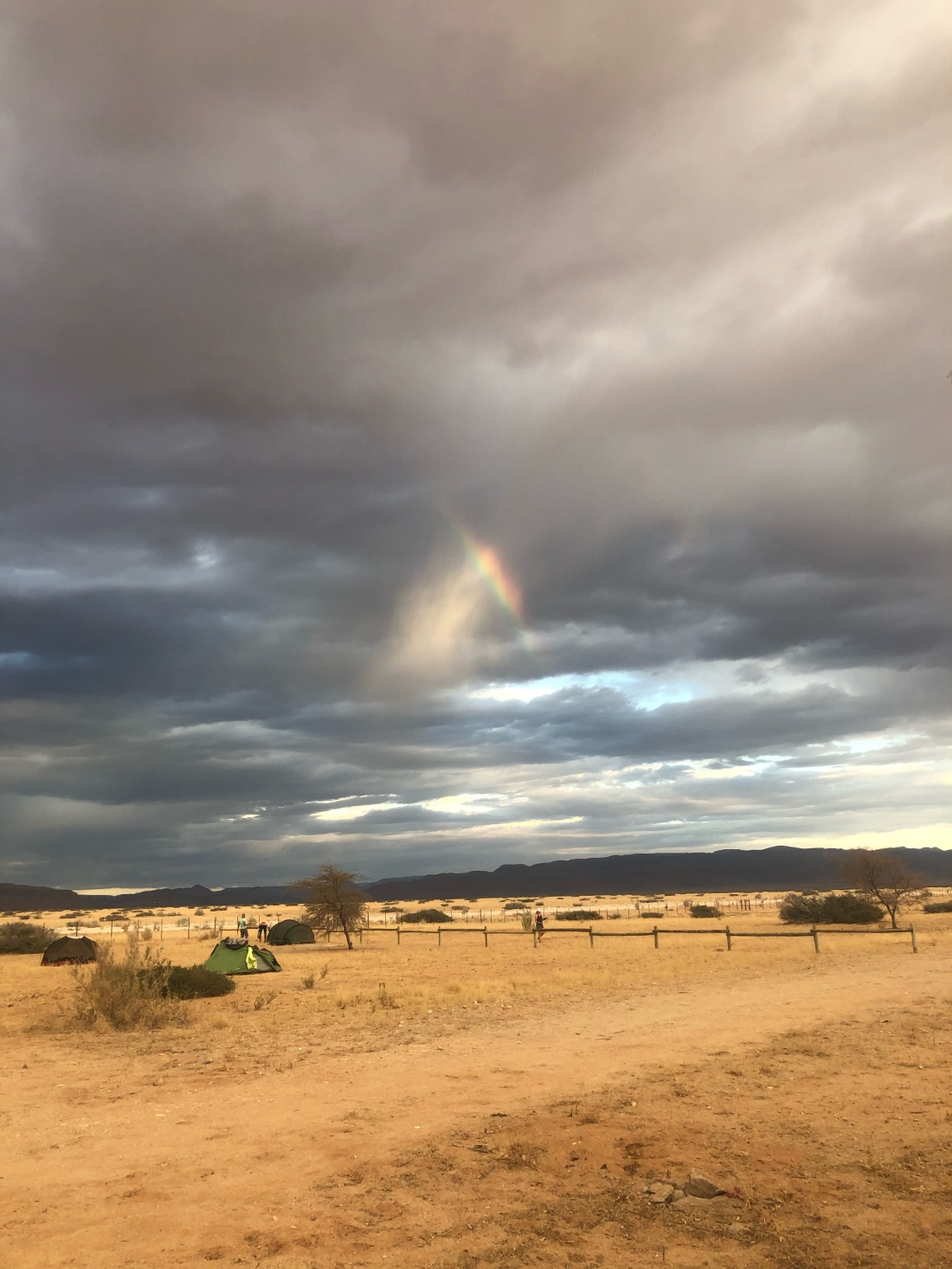 This is not to say that a proper attitude is all I needed to navigate those Namibian roads. Technique, the relationship of knowledge and practice melded to presentness of spirit, is essential. This does not come easily or quickly. It is a matter of time, dedication and perseverance. Even then accidents happen. The unforeseen waits for us. I was soon back on my bike with stiff, sore hips and throbbing arm. I was a little more tentative but I had learned something valuable. Time will tell if I have learned it well.